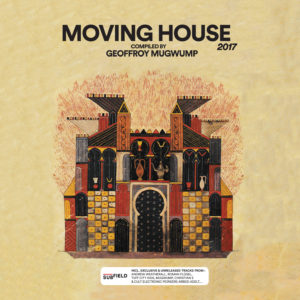 Besides Mugwump’s electronic post-punk/indie-pop debut-album, « Unspell » in 2015 which gained plaudits all across the board in the International music press and kickstarted a series of Mugwump live shows with a full live band and an upcoming second Mugwump album with the band, Geoffroy Mugwump is primilarly a (highly-respected) DJ.

With a 20 years experience led by infamous residencies at Belgium’s cult Food Club or Fuse and an history in assembling spot-on mixes and compilations, he holds an impressive catalogue of releases for labels such as R&S, Gigolo, Cocoon, International Feel, Eskimo, Permanent Vacation, a long recording relationship with Kompakt and ongoing dj support over the years from Andrew Weatherall.

Cue 20 years later and (deep)house has established itself in the mainstream and since tradition counts for nothing when it is no longer contested or modified, here’s a contemporary selection moving further along the more leftfield end of house, disco and techno anno 2017… the sort of cosmic and hybrid music Geoffroy Mugwump champions at his Leftorium clubnight (running in Brussels since 2011 with like-minded guests such as Ivan Smagghe, Superpitcher, Matias Aguayo, Optimo’s JG Wilkes, Prins Thomas, Sascha Funke or Robert Johnson’s Ata / www.leftorium.be).

« Moving House 2017’ is a new take on the series which aims at highlighting the new, the fresh & the wonky, assembled by a DJ obsessed at creating and playing daring dance music.